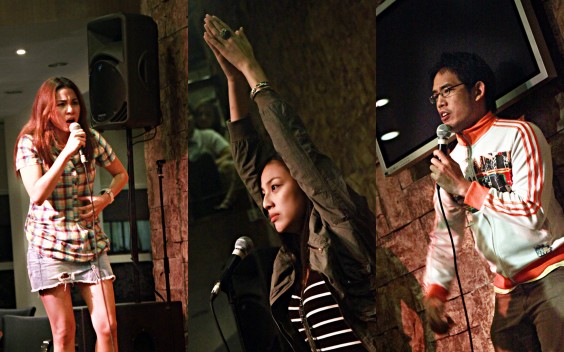 I am on my way to Manila when I learned that SPIT performed in Davao without me knowing.  Waaah! So I checked their schedule and I dragged Cathara to hexagon Lounge to watch SPIT with me. I just have to see it.

SPIT (Silly People’s Improv Theater) is the first (and I think, only) IMPROV group in the Philippines.  The group was organized by Gabe Mercado ( the ok-ka-ba-tyan?-commecial-guy of Yakult) after G. Mercado trained with Paul Sills at Wisconsin Theater Games Center.  Paul Sills is the founder of Chicago’s legendary “Second City”.  Paul Sill’s mother, Viola Spolin, was the first to author a book on Improv theater techniques, and she trained under “Play Therapy” Theorist, Neva Boyd.

For those of you who are used  to watching stand-up comedies where comedians would deliver prep lines, SPIT’s performance will definitely come as a breath of fresh air.  Watching SPIT is like watching your funniest best friend bantering at the school corridors, acting crazy while you are laughing at the jokes delivered in great timing and accent.

Do you remember how this one friend makes everything funny just by saying it? — lines that we, ordinary people, in ordinary days would find, well, ordinary?  But because he/she said it, suddenly, it sparked with flying colors and flew with a sizzle.  Some people just have this gift of wit and delivery that they could muster a line in perfect timing and tone and purge laughter out of anyone –even on a bad hair day.  Watching SPIT is like reliving those funny days. 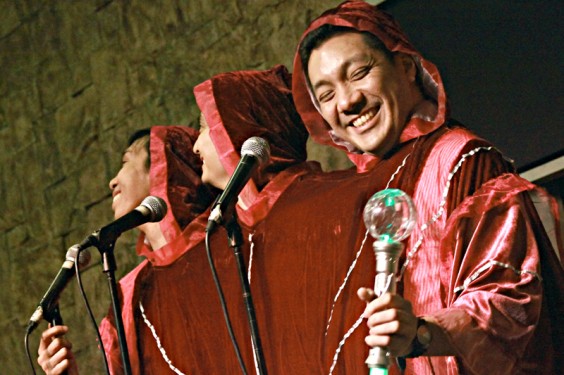 My favorite part of the show is when they brought The Oracle out.  A three-headed “woman” with heads of “men” hehehe!  Well they didn’t really say the oracle was a fem or not, but geez, the oracle certainly talks like a biatch :P 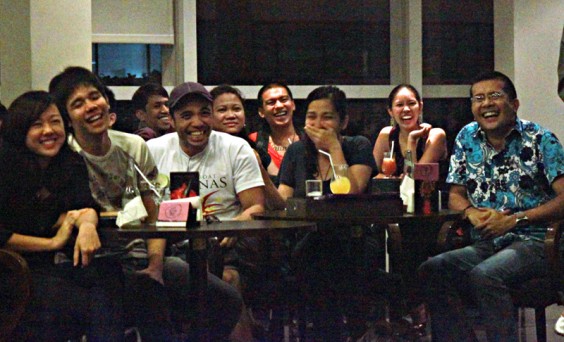 What happens is that they would let you ask a questions and the oracle would answer…except the oracle answers one word per head– meaning one head will start with a word, that the other head will have to support that the third head will have to continue and so on and so forth, until they reach the period…and sometimes, they reach it unexpectedly…answering questions in the most bizarre and funny way.  No it cannot be rehearsed, for questions are from the audience, and questions are sometimes more bizarre than the answers *tee hee!  The oracle, thank God, is witty and articulate, otherwise, this impromptu act will not be funny as hell. 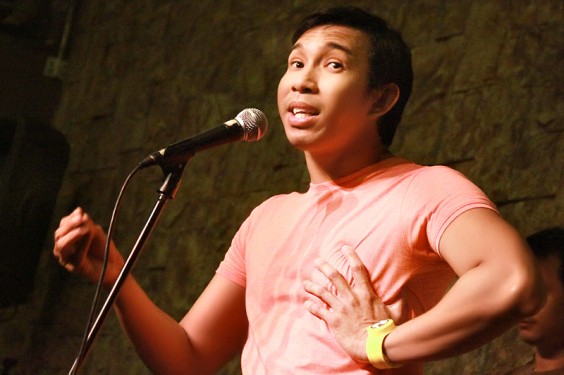 They also do beauty contests.  The pageant that the audience have decided was “Nanny of the Year”—oh, and above is the winner… and this guy is not pinching his nipples, that is his glamour pose ^.^

What they do is that they make audience write song lyrics or titles in a paper.  The host distributes it to the beauty contestants.  Judges are from the audience.  The Judge would ask one question per round where the contestants would answer it and incorporate their last line with one of the pieces of paper they received from the host (that contains the audience’s song lyrics or titles).  The catch is they don’t know what’s written…and thus, when they close their lines by reading the paper, it brings forth hilarious laughter as the title or lyrics of the song makes it weird…and strangely bizarre. 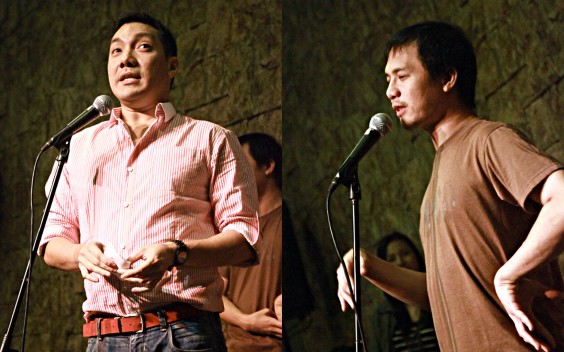 Example, the judge asked: How will you keep stray dogs  away?

Beauty Contestant: Thank you for your question, becuase I’m the nanny of Prince William, and we are not located in a remote barbaric place, we have no stray dogs…blah blah blah…and so this is what I say to him …(opens a piece of paper) “this guy’s in love with you pare”.