All I can say is that, I wish I didnt smile as much! ang epal ko! haha!

Do i I look like I haven’t taken a bath in the photo? (nod?) of course… its because I haven’t. After being cornered at Via Mare, sunday night, no thanks to Roberto (and accomplice Bianca), I proceeded to spend the rest of it running around to find markers and cartolina. Do not ask me what it was for… I’m still groping for words to explain how I got myself there…
When I sent Roberto a message that I am free for the evening, I was ready to get wasted and to get drunk. I was wearing my black skull dress as a prep. Wore goth makeup with black kohl lines in my eyes.ashen gloss and a “kinda-sorta” depressive expression to go with it. Had my mother saw me, she would have disowned me — which is not far from happening anyway. We haven’t spoken for almost a month now, btw (but that’s another complicated story of my life).

I was already looking the part, with my red high platform havas to match the red rubbers of my braces, I was ready to enter the dark side.

If I remember correctly, it was Roberto was the first one to get me drunk without me realizing it. There were three of us then. It was my first time to meet him. I didn’t know then that rice makes him grumpy. We were with a foreigner, so naturally rice is not part of his daily routine. But I’m a chicken-and-rice girl. I live and breathe because of chicken and rice. They ordered beer and other sundry stuff. Like a fool, to be polite, I told myself to wait for them to order rice before I order mine for dinner, it was, after all, past 6pm, they are bound to eat something of substance…or so I thought.
Come 9pm, the two just drank beer…I ended up closing the night, half shouting my theory of relativity in an attempt to philosophically explain how we are all a product of our human history…Not being coherent but trying to be by shouting — like that foreign guy you see that raises his voice when he orders, thinking that the waiter will understand him regardless of the fact that the waiter doesn’t speak his language — I was that…except I was not making an order…and the two are not waiters. But like that guy, I just didn’t make sense.
The next day, we met again, I was careful not to be in the same state… I went home feeling funny but sane. The third night, we met again over buckets of beer. In the fourth night of the beer marathon, I responded to the invitation by saying “I have a fever”. That was the end of my beer drinking career.
That sunday night, after having been done with all the stresses of my life, I thought it apt to drink my way to oblivion as a reward. But life has a funny way of making you change your plans. And life is not very patient, it makes you change it immediately. Roberto brought me a friendly face from Mindanao who snapped me out of my drinking fantasy by telling me that I need to get up 7am the next day. I nodded and life approvingly made the weather easier for me to accomplish my treasure hunt —> from one block to another, in search of markers and cartolina, and thankfully finding them at 7-eleven. After obtaining my jewels, i found myself at a coffee shop making plans and nowhere near getting drunk (drat)! My ghetto-morbid attire is making other people stare at me and I was looking too happy for my goth make-up.
But life decided to put in another surprise. A friend came by to uproot me from my little homey coffee shop. I ended up watching a movie, squeling in embarrassment for the actor, and going home hungry and stressed than ever because I havent started my cartolina job yet. Needless to say, I was a zombie when Biancatot woke me up via text.
And that is the story of that funny face in the first picture. I looked out of place…because I was out of place. Having slept so little because of going home late and waking up before everyone does because of a too early appointment, the madness of it all tends to register in the face.
Thank heavens, sanity came back the next day. 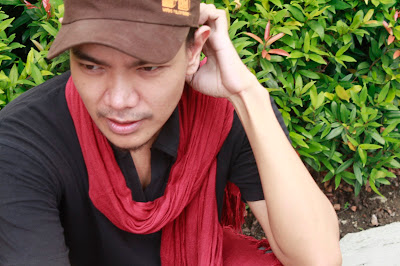 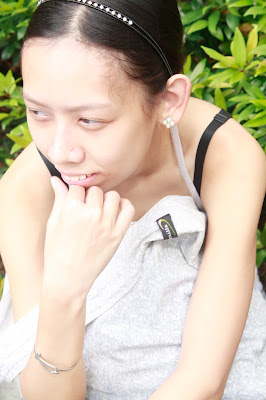