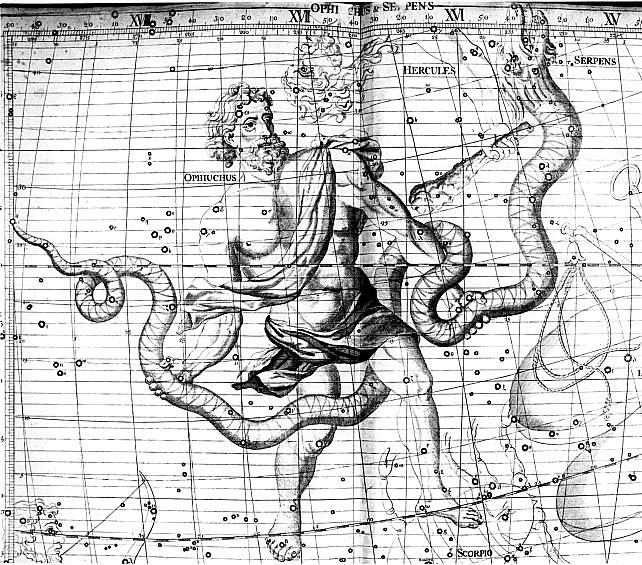 The heavens shifted and the astrologists who favor the tidiness of the 12 zodiac sign must acknowledge the 13th constellation to maintain accuracy, says Betty Mattison Rhodes.

As of today, I am officially an Ophiuchus, the Serpent Holder.  According to Rhodes, this sign is included in the 48 constellations described by Ptolemy but Astrologers did not include this sign because the sun only travels on the 13th sign for nineteen (19) days.  But the heaven have shifted, as it often does after hundreds of years and to maintain accuracy, astronomers must now recognize the 13th sign of the Mazzaroth.

Ophiuchus is believe to have represented Greek mythology characters that include Asclepius the healer,Trojan priest Laocoon, who was killed by sea serpents, and Phorbas, who rescued theRhodeans from the plague of serpents. (Michelle Esguerra, Batangas Today)

Ophiucus is the only sign linked to a real Man, some believed it to represent greek mythology characters but according to Rhodes, this sign represented Imhotep, 27th Century BCE.  Imhotep is known to the Greeks as Aesclepius.

Imhotep is credited with many accomplishments including the knowledge and use of medicine.  It is said of Imhotep that he brought the art of healing to mankind. The symbol of a serpent [or snake], which is still widely used today to represent the medical profession, was used to represent Imhotep.  Imhotep was also known as ‘Aesclepius’ to the ancient Greeks, but by any name the attributes are still all the same.

Ophiuchus is described as a mand holding a serpent, dividing the snake in two parts.  This image was patterned after Enki, a Sumerian god and the original serpent holder. One famous symbol that uses this sign is the medical staff.  It was believed that Imhotep was credited with many accomplishments including the introduction of the art of healing to mankind.

The Greeks identified him as Asclepius, the god of medicine. Asclepius was the son of Apollo and Coronis (although some say that his mother was Arsinoë). The story goes that Coronis two-timed Apollo by sleeping with a mortal, Ischys, while she was pregnant by Apollo. A crow brought Apollo the unwelcome news, but instead of the expected reward the crow, which until then had been snow-white, was cursed by Apollo and turned black.

In a rage of jealousy, Apollo shot Coronis with an arrow. Rather than see his child perish with her, Apollo snatched the unborn baby from its mother’s womb as the flames of the funeral pyre engulfed her, and took the infant to Chiron, the wise centaur (represented in the sky by the constellation Centaurus).

Chiron raised Asclepius as his own son, teaching him the arts of healing and hunting. Asclepius became so skilled in medicine that not only could he save lives, he could also raise the dead. (Ian Ridpaths, Star Tales)

When Hades realized that dead souls might stop entering hell if this practice is known to many, he complained to Zeus  and Zeus striked Asclepius with a thunderbolt.  Apollo, enraged by this harsh treatment of his son, killed the three cyclops that forged Zeus’ thunderbolts.  To soothe Apollo’s anger, Zeus made Ophiuchus immortal by setting him up in the stars.